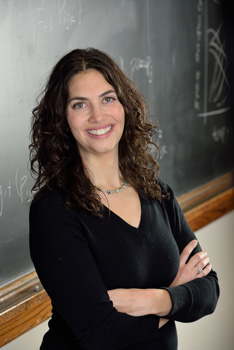 early career award from the National Science Foundation’s MarcoSystems Biology & Early NEON Science Program to investigate the effects of climate and land-use variables on the monarch butterfly and forecast future population changes at multiple scales across the continent.

The project is a collaboration between MSU, Georgetown University, and the University of Wisconsin. Zipkin and her team will develop an integrative modeling framework using over 20 years of data from multiple citizen science monitoring programs, spanning the entire monarch migratory cycle in eastern North America across all seasons. The model will be used to predict changes in the monarch butterfly population under future climate and resource availability scenarios and evaluate how conservation efforts may reverse population declines.

“Monarchs are an excellent model species for studying the impacts of change because they experience so many environments during their annual migration from central Mexico to the upper Midwest and southern Canada,” said Zipkin, who is an Assistant Professor in the Department of Integrative Biology. “Additionally, because monarchs are beloved by so many people, there is a wealth of citizen science data across their entire range, which we can use to tease apart the relative contribution of each of the many stressors on the population.” 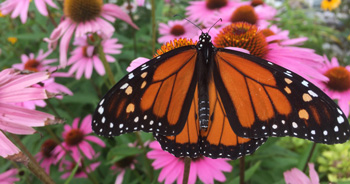 MacroSystems Biology & Early Neon Science grants support research to detect, understand, and predict the effects of phenology, climate and land-use changes on living systems, and the feedbacks to the environment that cross local and continental scales. Ten grants were awarded this year.

“The scientific community has seen a recent boon of new tools, from remote ecological sensor networks to citizen scientist-generated data, that allows us to study biology at scales that were never possible before,” said James Olds, head of the NSF Biological Sciences Directorate, which oversees the MacroSystems Biology and Early NEON Science program. “These projects take advantage of those new tools, asking questions about how measurements made at one scale can be applied to others. Macrosystems science studies every dimension of biology, from genes to the globe.”

Zipkin anticipates that the modeling framework her team develops will be adaptable to other cross-continental species that are difficult to track. “A species’ range and viability are determined not only by fine-scale habitat variables, such as temperature and food availability but also by broad-scale factors, such as extreme climate events or the distribution of suitable habitat”, Zipkin adds. “Our goal is to develop a modeling framework that accounts for all of these factors at different scales so we can accurately assess what the future might hold for vulnerable species.”